10 TECHNIQUES Pros To Use In valorant

We’ve already discussed the basics of how to play Valorant in terms of eliminating the enemy team and/or planting or defusing the spike, but there’s much more to the game than the basic premise.

When a round starts you enter an initial “buy” phase. Where you can purchase weapons to use in that round. The first round of a game invariably starts with everyone using pistols as no one has earnt any cash yet.

Money is earnt by winning and losing, so in the next round you can choose from a wider range of weapons including shotguns, sniper rifles, assault rifles, SMGs and more.

You can also buy armour and boosts for your abilities here. Gunplay is a main crux of the game as you need to shoot the enemy (for the most part) in order to win or avoid being shot yourself. So it’s worth practising to see what guns you get on with.

Cash is not carried over to the next game, so be sure to spend what you earn in order to win.

The basics of any tactical FPS game apply here. Aim when you can, fire in bursts and use cover as much as you can.

Then use your agent’s ability to gain the upper hand, help your team or prevent the enemy from gaining the advantage. 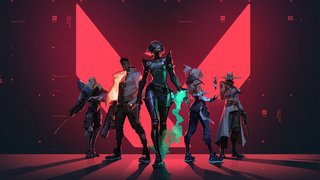 We’ve been playing a bit of Valorant to bring you some tips and tricks.

As with CS:Go, most of Valorant’s Spike Rush mode involves stalking your enemy. Defenders are often better off finding (or creating) a choke point to pick off the attackers as they move into the map and attempt to plant the spike.

Take time to learn where the sweet spots are and avoid standing in the open as much as possible. We find it’s better to fire in bursts, then duck behind cover as much as you can. Use your abilities to dash out of danger, get the height advantage or obscure enemy view so you don’t die.

Pay attention to what’s going on, both audibly and visually. Other players may be using abilities that will reveal enemy positions and you can use this to your advantage.

You’ll also hear enemies if they’re approaching. Listen and watch out for teammates dying too. You’ll both hear and see that. If you’re defending B but suddenly everyone at A is dead that might indicate where the enemy is. You’ll also see an indicator on the screen when people are getting shot nearby.

You can also “ping” enemy locations and things of interest. Aim your crosshair in the right direction and press Z. This will alert your team and could save your life.

Holding shift makes you walk quietly. Crouching does the same. Use both to quietly move about, rather than thumping your feet across the map giving yourself away.

Gunplay is punishing. The game might feel slow at first – walking is slow for example, so it can take ages to get across the map – but time-to-kill is short. It takes just three or four bullets to kill an enemy or be killed and recoil is insane. Someone who’s camping with a carefully aimed single-shot or semi-auto weapon will have more success that a run-and-gunner. In short, movement ruins accuracy.

This is good knowledge as it means as an attacker you need to be aware that enemies are likely camping around the corner. Use abilities to block their view or reveal them before you take a turn and get unfortunately shot.

You’ll find orbs scattered around the map. Grab these to get points for your abilities. You can also buy the lesser abilities during the buy phase.

You need to “unlock” your ultimate power by getting kills (or by dying) so it takes time before you can use it.

Make the most of your abilities, not just for yourself but for your team. Highlight enemies, give cover from view, heal when you can. Teamwork makes the dream work.

Take time to learn the map

Certain maps have interesting areas that can be used to your advantage. One of the spike planting points, for example, has a big door that you can close. Do that once the bomb is planted and you’ve limited the enemy’s approach and cut off their route of access, which can really make things interesting.

If you’ve got a character who has an appropriate ability, you can use it to get up high on ledges or crates to shoot down on unsuspecting enemies, which an be useful too. Learning the map will help you work out the best spots to do this.

Like CS:Go, Valorant gives you a small speed boost for having your knife out. Movement in this game is generally slow, but with your knife equipped you can move a tad faster. Some weapons like SMGs and pistols also have the same impact.

You start each match with very few credits, but winning a match earns 3,000 credits, while losing gets you just under 2,000. If you keep losing, you get extra cash as a consolation prize. Spending it on guns, armour and abilities can help turn the game around if spent wisely.

If you’re on the winning team you get to keep the gun from the last round and won’t need to spend as much anyway.

You can buy fancy gear, but you can also spend your money to buy guns for others if you have spare money and are feeling generous. Considering arming your team for the win!

In terms of guns, the Phantom or Guardian are recommended beginner guns by most. We like the Guardian a lot as it’s basically a semi-auto rifle, which means you need to tap-tap-tap your bullets and can’t spray as much. So you’re more likely to get kills. And remember, aim for the head.

It’s worth noting that you can pick up enemy weapons which can be a good way to get an upgrade without spending money.

Keep an eye on the minimap

The minimap is useful in any shooter. Even more so in Valorant. If you watch you’ll see that the minimap not only displays where your team members are, but where they’re looking.

Keeping an eye on this will help you work out which points are being attacked and defended or where the threats are coming from. This can be very useful and it’s important to keep one eye on it so you can see if/when people start dying.